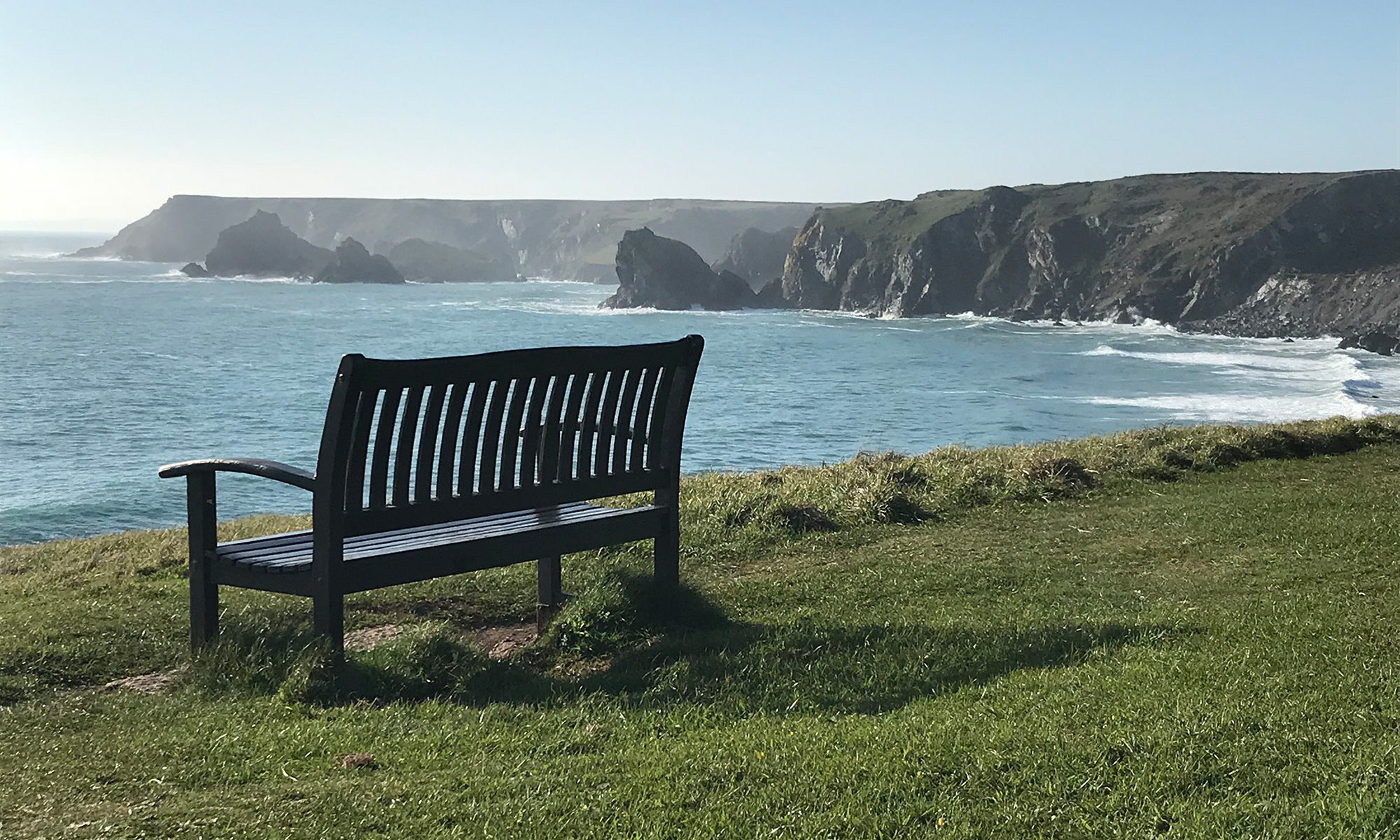 Far west, but worth any effort

There can be no greater thrill than sitting at the cliff top kissed by the sun looking out to the sea.

The Far West of Cornwall is an area of outstanding natural beauty and a must-go for wildlife enthousiasts. Take a walk on the Coastal Path and you see and smell an amazing number of flowers in all colours and you see and hear lots of different birds. Enjoy the phantastic sea views and watch out for seals in the bay. If you’re lucky, you might even see dolphins or basking sharks.

The beautiful beach of Gwenver is a ten minute walk, the wide expanse of Sennen beach is about twenty minutes – both of them are well-known surf destinations and great for family beach days.

The two pubs of Sennen, the Old Success in the cove and the First and Last Pub by the church are within a fourty minutes walking distance (of course you may take the car or the bike instead). There are also two Fish and Chips spots at Sennen on the main road and at the beach. During the day you get food and drinks in Sennen Cove at Little Bo’s Cafe and the Surf Beach Bar.

There are also nice little cafes in Trevescan (the Apple Tree cafe) and at St Just (the Dog&Rabbit). Good dining locations in driving distance are (besides the Old Success at Sennen beach) the King’s Arms at St Just, the Tolcarne Inn at Newlyn, the Cornish Barn at Penzance, Gurnard’s Head at the B3306 at Treen and the Tinners Arms at Zennor.

Food shopping can be done in Sennen at the Costcutter, in St Just at Coop and to fill a big basket at Sainsbury or Tesco in Penzance (they also deliver to New Forge if you prefer). Not to forget the lovely Sennen market every Tuesday morning with local products. The Farmer’s Market near St Buryan also offers fresh local products (meat, eggs, milk products and more). Fresh fish may be bought in Newlyn at Harvey’s or Stevenson’s.

If you want to explore the surroundings of Tregiffian (without the need of your car), the first thing to go is usually Gwenver beach. Take the small road up to the small parking area at Gwenver, but turn right into the „natural tunnel“ shortly before. After crossing the „tunnel“ you ‘ll have your first phantastic view over Whitesand Bay. Take a deep breath and enjoy! Then climb down the steps to the beach and relax.

After a while you may want to extend your walk further and take the Coastal Path to Sennen Cove for a coffee, ice cream or a crab sandwich. On your way back take the route up through the Vellandreath valley and pass through Escalls on the cliffs. Watch the sun go down and enjoy another perfect view on the bench at the lower parking area at Gwenver.

This walk can be extended further in many ways up to a full day hike : At Sennen Cove pass the lifeboat station and the public parking space, then follow the Coastal Path and climb up to the tower above the cove (another great view!). From here it’s not far to Land’s End (don’t miss the wreck in the next cove) and the rough but picturesque cliffs all around. Follow the Coastal Path further, until you reach Mill Bay / Nanjizal with its lovely beach and a small natural pool. Turning back upstairs take the public footpath to Trevescan. From there it is only a short distance to Sennen or Land’s End, so you may decide which way to take back to New Forge.

You may divide this walk into two parts :

Another nice walk from New Forge follows the public footpath straight right when you leave the Tregiffian area down to Nanquidno farm in a lovely little valley. Shortly after Nanquidno take the way left and soon you’ll reach the Coastal Path.

From here you may turn left and follow the Coastal Path back to Gwenver beach with lots of beautiful views and extraordinary cliff forms. You might even see dolphins, if you’re lucky!

Or move right and take the Coastal Path in the northern direction to St Just via the beautiful Cot Valley or even further via Cape Cornwall. From St Just you may take the bus back : https://www.firstgroup.com/cornwall

The bus is always a good recommendation, when you want to visit places like the Geevor and Levant mines, towns like St Just, St Ives or Penzance, or if you plan for a one-way Coastal Path hike, so you may park your car at a public car park, walk the path to your destination and then take the bus back to your car.

This could be the case in Porthcurno. The Coastal Path is much recommended in both directions :

To the West/North climb up to the Minack Theatre and enjoy the phantastic views over the bay and its beautiful beach to Logan Rock.

The Minack Theatre is open all day for visits, but you may want to come back to enjoy the atmosphere of an open air theatre performance high above the sea on a perfect evening. There are also daytime events for children. https://www.minack.com

From Minack Theatre it is only a short walk to Porth Chapel beach, one of the most beautiful small beaches at the Cornish coast. The Coastal Path leads you further to the nice little port of Porthgwarra (time for a break at the small cafe) and to Gwennap Head with its landmarks and the  coastguard station. If you go on, you’ll finally reach Nanjizal again, but you may want to turn round and take the inland route via St Levan church back to Porthcurno.

If you take the opposite direction from Porthcurno you pass a few small bays (if you go down, be aware of the flood coming in later on) and reach the outstanding Logan Rock. Next one in line is the pretty Penberth Cove and so it goes on and on through sandy and stony coves until – after passing Tater-du lighthouse – you reach the nice Lamorna Cove (and its cafe) at the end of the lovely Lamorna Valley, which you can walk up to take the bus back to Porthcurno.

Don’t miss the walk from Lamorna to Mousehole and back through the inland (or vice versa), which  is as beautiful with views over Mount’s Bay and to St Michael’s Mount as interesting when you pass the mysterious wood of the Kemyel Crease Nature Reserve.

The Coastal Path on the West Coast (Land’s End to St Ives) is as beautiful as on the South Coast (Land’s End to Penzance). It’s your choice, if you do longer hikes or plan for shorter walks. You find breathtaking spots everywhere, the highlights on the West Coast are Cape Cornwall and Botallack, Pendeen lighthouse and Portheras Cove, Bosigran castle and cliffs, Gurnard’s Head and Zennor Head. There are also footpaths up the hills that offer spectaculous 360°-views or to the ancient sites of Men-an-tol and Lanyon Quoit (between Morvah and Madron) or the Merry Maidens and the Piper (near Lamorna).

Don’t miss driving the B3306 from St Just to St Ives on a clear and sunny day, it’s a must, wether you drive in your own car or take the bus. This is one of the most impressive roads along the British coastline.

You also take the B3306 (or go by bus) to visit the Geevor and/or the Levant mines, an extraordinary experience. At Geevor you get an impression of everyday´s life and work of the miners, since most of the equipment and furnishing has been left there when the mine was closed. The tour finishes with a walk into one of the narrow mine shafts.

At Levant you can see the old steam engine working. Both mines are close to each other and may be visited on one day.

A visit to St Ives usually is part of every journey to the Far West. The lovely port together with the picturesque boats is one of the most taken photo shots in Cornwall. St Ives has three beaches. Also lots of painters have found their motives here, which is reflected in a huge number of galleries. There is also the Tate St Ives, which might be worth a visit as well. Even if you don’t care about the gallery, take the lift to the cafe in the upper floor and enjoy the view over the town up to Godrevy lighthouse in the North. During summer it might be crowded, but even then its special flair will capture you. Don’t take the car to St Ives, since you won’t get a parking space, use the bus or the train from St Erth instead.

Whereas St Ives is the typical postcard town, Penzance appears rougher and reflects the hardness of life at the sea. It is worth a visit as well, since there are also nice galleries (Penlee House and the Newlyn Art Gallery in the nearby Newlyn), cafes and restaurants. Another attraction is the Jubilee Pool, the 90 years old Art Deco swimming pool at the beach promenade. From there you have a great view over Mount’s Bay to St Michael’s Mount.

St Michael’s Mount is the counterpart of the French Mont St Michel. At low tide you can walk there from Marazion by foot, but you need the boat shuttle to get back, if the flood has come in the meantime. Take a break and watch the kite surfers in the Bay on a windy day!

An outstanding natural experience are the Hayle dunes in the St Ives Bay. Park your car at the public car park at Gwithian Bridge. From here you can do a roundwalk to the Black Cliff at the Hayle Bar through the dunes and back on the beach (or vice versa depending on the tide).

If you take the other direction from the carpark, you soon get to Godrevy Point opposite Godrevy lighthouse, one of the most photographed lighthouses on the British coast. Further on you’ll reach the small Mutton Cove, which is usually occupied by seals.

Lizard Point is the most southern point of Great Britain and can be reached from New Forge within an hour. Take the Coastal Path from the car park into both directions : Turn right and follow the path to one of the most beautiful places at the Cornish coast. The Kynance Cove invites for a swim (at low tide) or a cream tea or latte on the terrace of the nice little cafe with phantastic sea view.

Or turn left from Lizard Point and follow the Coastal Path through various beds of flowers to Cadgwith, an old fishing (and smuggling) village.

The northern end of the Lizard Peninsula is marked by the fjord-like Helford River. Take a canoe or make a boattrip to Helford Passage and the Frenchman’s Creek. If you have time left, visit the nearby Trebah Garden.